We’ve all fallen victim to calling for an ad-hoc meeting at one time or another. You send an email, a phone call, or a message asking team members to drop what they’re doing and head into the meeting room. When the meeting comes to an end, everyone is left playing catchup to accomplish the day’s tasks.

In this article, we’ll take you through the ins and outs of ad-hoc meetings. We’ll outline the key issues, how to host an impromptu meeting successfully, and the alternatives. 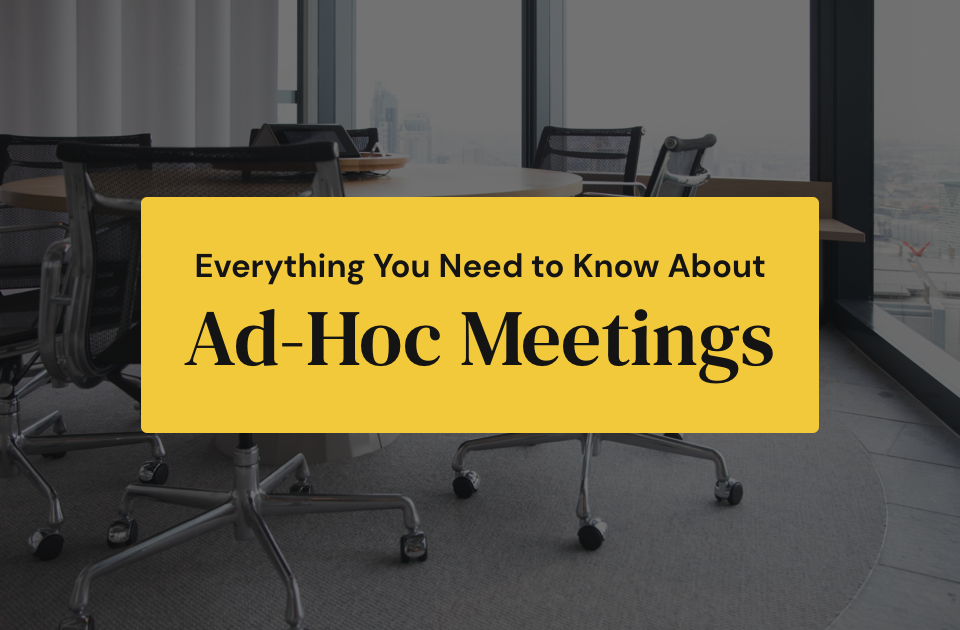 First things first, what is an ad-hoc meeting?

Ad-hoc meetings occur outside your scheduled tasks and meetings. Unlike recurring meetings, which occur over regular intervals and have a consistent theme, ad-hoc meetings deal with a specific topic or discussion. They’re also known as impromptu meetings or one-off meetings.

They’re often used during emergencies and crisis navigation. For example, let’s say a top-paying client is considering ending their contract over the next few days. An ad-hoc meeting might be necessary to identify the best way to keep them on board—and fast.

But the real problem is that ad-hoc meetings are used when they’re not necessary. ‍

For many people, it’s second nature to ask a question or make a phone call to get immediate help with an issue they’re facing. In the workplace, these activities disrupt the flow of work and impact productivity.

Instead, a lot of these questions and meetings could be asynchronous. A simple async screen share or voice message would make the entire process less disruptive.

Because of their spontaneous nature, last-minute meetings are usually unplanned and lack an agenda, which isn’t ideal. Of course, this varies from meeting to meeting—sometimes you may be able to create a brief agenda; other times you might not. It all depends on the purpose of the meeting and how much time you have.

Ad-hoc meetings are sometimes necessary, but if they’re a habit and your team is being interrupted several times a day to “hop into a huddle,” then it becomes a problem.

The problem with ad-hoc meetings

During a crisis, ad-hoc meetings can help teams make fast and informed decisions. But using them too often can cause issues in the workplace.

Ad-hoc meetings disrupt deep work, impacting productivity and your team’s wellbeing. They also lack structure, making it difficult for participants to know what to expect and when the meeting will end.

Let’s look at these problems in more detail.

Deep work involves focusing on a single task for an extended period without distraction. It’s the type of work that cognitively challenges you and requires your undivided attention. You need to get rid of any distractions to do it properly.

This is where ad-hoc meetings can be a serious problem.

Disrupting deep work can have a detrimental effect on productivity and quality of work. After being interrupted, it can take up to 23 minutes to regain focus. In a bid to catch up on lost time, the focus might not be as deep as it was before the interruption.

It’s also a pretty self-serving habit. Put yourself in the shoes of someone engaged in deep work.

You're focusing hard on the task at hand when you’re interrupted by a colleague who wants a meeting to discuss a problem or question. Your colleague expects you to drop what you’re doing and support them.

Imagine this happens several times a day because synchronous ad-hoc meetings aren’t discouraged in your workplace. How do you feel?

You might feel as though your colleagues value their work above yours. You may also feel frustrated about your broken concentration. Either way, you have to carve some more time out of your day to replace your lost work.

Over one-third of employees waste time on calls and meetings that don’t accomplish anything. To make sure that you run an effective meeting, you need preparation. Ad-hoc meetings rarely allow a lot of prep time.

Ad-hoc meetings are off the cuff. No one knows how long they’ll last and what exactly needs to be discussed. They’re often unstructured and lack the preparation they need to be productive.

Some people perform well on the spot, but others like to sit and formulate a well-rounded response. Ad-hoc meetings rarely allow people to do this, but asynchronous communication is a good alternative.

A work culture with too many meetings

If you’re constantly running unplanned meetings, it’ll start to feel like the norm. Your team will start to expect regular ad-hoc meetings and will likely start running them, too.

This type of work culture isn’t a good thing.

‍Too many meetings can cause meeting overload. Employees can feel burnout, which can impact their physical and mental wellbeing. If you have a remote team, employees can also experience Zoom fatigue with too many virtual meetings.

Around 67% of employees also say that too many meetings distract them from making an impact at work. Fortunately, there are other ways of communicating that reduce Zoom fatigue and keep employees working as productively as possible—more on that in a minute.

Does your ad-hoc meeting need to be a meeting?

If ad-hoc meetings are such a problem, why do we have so many of them?

The truth is, they’re a bad habit. A lot of the time, ad-hoc meetings can be avoided with proper planning and preparation.

So, how do you know if you need an ad-hoc meeting? ‍

If you have an urgent problem that’s high-priority and requires the attendee's immediate attention, an ad-hoc meeting could be necessary.

If it’s not urgent, you can handle the situation with less pressure and less time wasted.

Think carefully about whether a meeting is necessary at all.

There might be another way to solve your problem without pulling people away from their work. Let’s look at those alternatives.

What are alternatives to an ad-hoc meeting?

Nine times out of ten, an ad-hoc meeting isn't going to be the best use of your time and resources.

Think about how many times in your organization someone is asked to "look over a document" (or a section of code, or a presentation, etc.) before sharing it. To do this, your team members drop whatever they’re working on to glance over a colleague’s work. It breaks their focus and steals their time to focus on something that isn’t a priority.

What should they do instead?

With an async tool like Yac, you can share your screen or record your thoughts in a voice message. Colleagues can listen in their own time (in a group discussion or a 1-on-1) and fire their thoughts back.

With async meetings, you’re also not restricted by availability. You can communicate with your team when it suits your schedule and around your best times to focus.

Setting response expectations will be crucial. Your colleagues will need to know that there’s no need to reply instantly and that taking the time to formulate a response is encouraged.

Here are some other benefits of using async communication:

Email, project management tools, and communication platforms like Yac are examples of async communication (but watch out for immediate response expectations and email overload).

If you need to have a real-time ad-hoc meeting, you’ll want to consider how to do it so it’s the least disruptive.

We’ve already talked about preparation, but there are other factors to think about. Let’s look at what they are.

Prepare as much as possible beforehand

It’s not always possible to prepare for an ad-hoc meeting in advance. But if you do have the time, come into the meeting as prepared as you can be.

Here’s what we’d suggest you do:

Don’t invite everyone to the meeting if they don’t need to be there. If you do, you’ll be wasting their time and stopping them from doing other work.

By inviting unnecessary participants, you’re also making the meeting harder than it needs to be. For example, if you have a large group, there might be a lot of conflicting ideas that you’ll need to sort through. This is much easier to navigate with a limited number of relevant decision-makers.

To help you narrow it down, ask yourself the following questions:

Think carefully about who needs to be involved and only invite those people. You can give participants the option of attending or viewing the meeting notes later.

Stick to an agreed time limit

Keeping a meeting on schedule is easier said than done—especially if it’s an ad-hoc meeting with a hastily thrown-together plan.

Here are a couple of suggestions to help you keep your meeting within the specified timeframe:

You’re already asking people to give up their time to be in this meeting. The least you can do is keep it within the agreed timeframe.

Use the right tools

If you’re part of a distributed team, you’ll need tools and platforms to support your meetings. Having the right tools in place will make your meetings as streamlined and efficient as possible.

Ultimately, the best tools to use will depend on your organization. Only you know what platforms work best for you and your team.

To point you in the right direction, here are a few things to think about:

There’s a time and a place for ad-hoc meetings, but most ad-hoc meetings as they’re used today cause more harm than good. They can disrupt deep work, impact productivity levels, and create a work environment that encourages meetings even when they’re not necessary.

To make sure you use ad-hoc meetings effectively, you need to understand when to use them. If you have a problem that doesn’t need immediate attention, use async communication.

With a platform like Yac, teams can communicate and discuss impromptu issues without being pulled away from their work. Find out more about Yac or sign up for free to get the ball rolling.

Ready to go async with Yac?