The Complete History of Email

The first email ever sent was in 1971 from a man named Ray Tomlinson to himself. While we may never know exactly what the email said, Tomlinson stated in an interview once that it was probably “something like QWERTYUIOP.”

Today, half a century after that first electronic message, over 4.1 billion email users worldwide send almost 320 billion emails per day.

So, what happened in those 50 years that launched email into our everyday lives and shaped how we communicate? And, what will happen over the next 50 years? Is email sustainable, or will newer technologies and communication pathways soon make email a distant memory?

We’re going to dive into a brief history of email, talk about how email is used today, and discuss our predictions for the future of business communication. 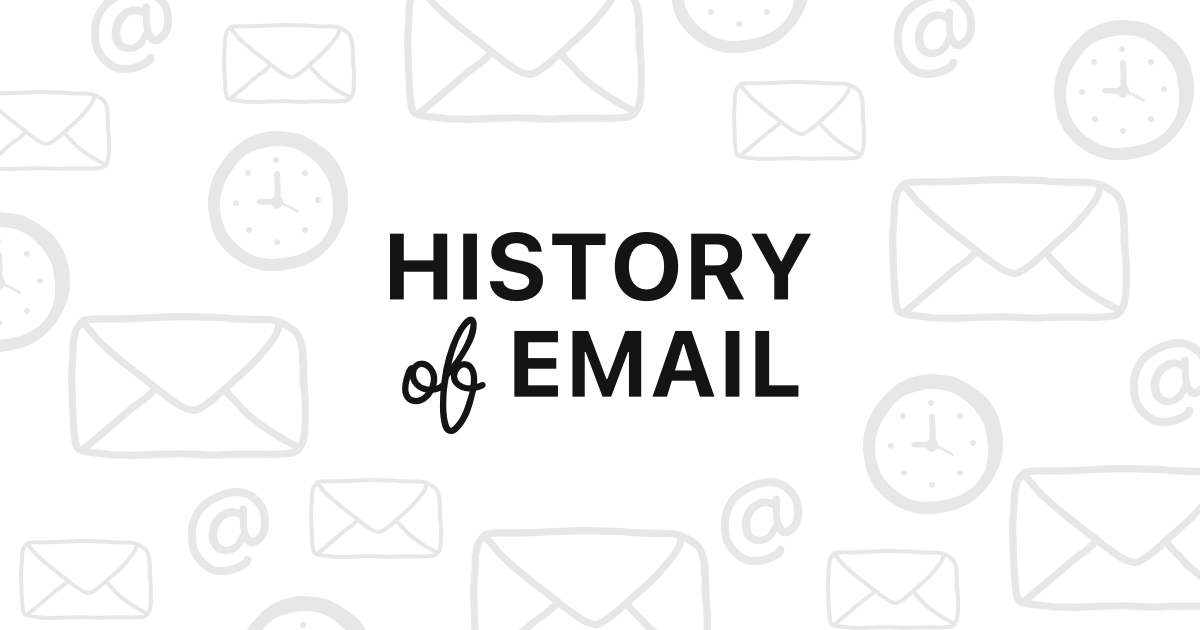 How the concept of email began

While the first email was sent in 1971, various iterations of the idea began as early as 1965.

That was the year that MIT started a program called MAILBOX, allowing users to leave messages for other users on a computer for them to access at another time. This obviously had limitations, though, as it only worked when people accessed the same computer.

So, the email pioneers continued exploring.

In 1969, the U.S. DOD created ​​ARPANET (Advanced Research Projects Agency Network), the first iteration of the internet that connected a network of computers to improve communication across the organization.

This created a brand new opportunity to send an electronic communication to a completely different device across a network.

On October 29, 1969, 21-year-old student programmer Charles Kline sent the first message over ARPANET. He logged the transmission in his notes:

The first online message was actually a mistake. When trying to type the word “Login,” the system crashed. So, instead of being something prophetic and visionary, the earliest known system-to-system message was simply: “Lo.”

And with that, the first iteration of an email system was born.

The next phase of electronic mail

This new program sent text-based messages to other email programs on the network, the first of which was Tomlinson’s “QWERTYUIOP” test message.

The next issue to address was: How do you tell the computer where to send your message?

Tomlinson had the answer: the @ symbol.

So, the programmers created usernames for each electronic mail user and formatted them to be “username@nameofcomputer.” A couple of years later, in 1973, the “To” and “From” fields, along with the ability to forward emails, were added.

By 1976, electronic mail made up 75% of all ARPANET traffic. Queen Elizabeth II even sent out her first email that same year.

We also saw the first spam email sent out in 1978, when Gary Thurek sent an unsolicited email marketing message to hundreds of ARPANET users. The email was promoting a new product for Digital Equipment Corporation and generated $13 million in sales.

With all this commotion, people soon wondered how to take email even further and communicate with computers outside of their own organizational network.

More and more developers started creating their versions of electronic mail. What could be the first use of the word “email” came from 14-year-old Shiva Ayyadurai’s EMAIL program, which he built for the University of Medicine and Dentistry of New Jersey.

He later copyrighted the term, but there’s still much debate about the actual first use of the word “email.”

The launch of the World Wide Web in 1983 paved the way for emails to be sent across vast networks and different organizations, something desired since Tomlinson sent his first intranetwork email message.

Around that time, new email standards and protocols popped up to simplify how messages are sent and received. First, we saw the Simple Mail Transfer Protocol (SMTP) brought to life, based on the groundwork created by ARPANET’s SNDMSG program.

In the mid-80s, other email protocols were launched, like Internet Message Access Protocol (IMAP) and the Post Office Protocol (POP). All three protocols are still used today.

The modernization of email

It wasn’t until 1989 that email became more widely accessible.

CompuServe became the first internet service provider (ISP) to offer an online-based email service, allowing users with dial-up internet to send emails to each other completely online. It was eventually bought and turned into AOL.

Soon after, email client Lotus Notes was launched and later bought by IBM.

The first completely online email message system was Hotmail, which launched in 1995, generated 8.5 million users in the first year, and was bought by Microsoft in 1997 for $500 million. Yahoo Mail also came out in 1997.

While that’s a far cry from the number of emails sent per day now, it was a sign that email was catching on in a major way. Instant communication was a new phenomenon that no one wanted to let go of.

So it should come as no surprise that more and more companies wanted to get in on this new and exciting technology and make their mark on email history.

Microsoft rebranded Hotmail as their now well-known Outlook. Gmail was created in 2004 and is now one of the most popular email services available. Ordinary people had email accounts that they could access from their personal computers. It became the new norm for both personal and work communication.

How email is used today

These days, everyone has an email address—and likely more than one. And they use them constantly.

A representative, post-pandemic study of email users found that 67% of professionals check their email within 30 minutes of waking up. A quarter of those professionals will do so immediately after waking.

And they don’t do it because they love it. Around 22% of workers want to quit their jobs because of the amount of email they receive (the next biggest pain point being too many video meetings).

We’re now sending and receiving an average of 126 emails per day.

Furthermore, email marketing continues to prove itself as a revenue-generating giant. ROI is as high as $55 per dollar spent, and according to a report, 79% of small businesses said email marketing is important or very important to their business strategy.

However, email has become overused and over-relied on, especially when it comes to business communication.

When email is the primary form of communication, it also leads to stress. It’s too easy to miscommunicate over text-based messages, and senior leadership is well-known for sending short, easily misinterpreted emails.

Our culture suffers from email overload, which leads to context switching and burnout.

In his book “A World Without Email,” Cal Newport claims email itself doesn’t need to be banished—it’s the way we use it that’s the issue. Newport says we use email with a hyperactive hive mind approach.

He describes this mindset as:

“A workflow centered around ongoing conversation fueled by unstructured and unscheduled messages delivered through digital communication tools like email and instant messenger services.”

Essentially, email causes us to spend too much time talking about the work we need to do rather than just doing it.

With all of this personal, business, and marketing email communication barraging our inboxes, it’s no wonder our culture is suffering from burnout and email overload.

Even though email is meant to be a form of asynchronous communication, it now causes workday interruptions. It’s one of the leading causes of context switching (constantly ping-ponging from one task to another or stopping deep work due to an interruption).

A widely-cited McKinsey study found that the average worker spends 28% of their workday managing their emails. We also know that it can take an average of 23 minutes to get back on track after being interrupted, including by pings from your inbox.

Newport explains the detriment of context switching on productivity:

“Every time you switch your attention from one task to another, you are basically asking your brain to switch all of these cognitive resources.”

Email today is everywhere. It’s on our computers, and it’s on our personal phones. We check email while watching TV, while in bed, and even while in the bathroom.

So, what can we do to change that?

Our predictions for the future of email

Email is now 50 years old, and much of the concept has stayed the same. In fact, in a 2012 interview, Ray Tomlinson himself said, “I see email being used, by and large, exactly the way I envisioned.”

Because email hasn’t evolved much in 50 years, it’s becoming outdated for modern ways of life. It’s time-consuming, it’s easy to miscommunicate, and there is definitely a better way to share work information (such as asynchronous communication).

This is why we predict that eventually, email will be phased out altogether. Younger generations are already starting to reject email, and we imagine that trend will continue to grow.

Creative Strategies ran a study in 2020 to see how teams were collaborating as they moved to remote work, and the bulk of employees over age 30 were using email tools like Outlook.

However, employees under 30 were using tools like Google Docs, Zoom, and even Apple iMessage more often than a single email tool.

Interviews shared in a recent New York Times article showcase the Gen Z disdain for email. One said they prefer to communicate with “​​literally anything but email” because it’s so outdated. Another went so far as to say, “Every time I get an email, it is like getting stabbed.”

With increasingly lower sign-ups from younger users, what will replace email?

Instead of a major communication tool, we’ll see email used only for account verification, ecommerce, receipts, password resets, and the like. Single sign-on accounts will be the future, using your social media accounts or cell phone number to log into apps and tools.

But that doesn’t mean that email will cease to exist completely.

We’ll likely still see email used often within B2B environments. However, it won’t live on in its same form.

Instead of email addresses like “name@company.com,” we’ll see vendor-created default accounts with Gmail or iCloud addresses. People will also use features like iCloud’s “hide my email” feature and give out proxy emails instead.

When it comes to interpersonal communication in the workplace, companies will start exploring other team communication apps with richer, more humane features (like Kona’s quick employee mood polling).

One avenue gaining traction is voice messaging. It’s a more human alternative to text-based messaging, and when used asynchronously (meaning no immediate response is needed), it’s the best way to communicate about work.

As the receiver, you don’t have to spend anxiety-fueled time trying to decipher the tone behind the message. If your colleague feels nervous, excited, frustrated, confused, etc., you’ll hear it in their voice. We communicate best when we can use more than one sense; Yac allows us to do that.

With a platform like Yac, you can even see transcripts of the message so you can scan the context before listening.

To combat burnout and fit better into modern life, we believe email will be replaced by more convenient practices and more up-to-date technology like voice messaging and screen sharing with accurate transcripts.

One of those modern ways to communicate is Yac. Book a discovery call with us to learn more about how you can use asynchronous communication to revamp your team’s productivity—and get back that time spent in your inbox.

Ready to go async with Yac?